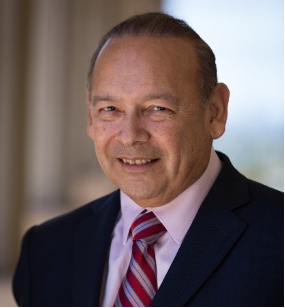 He retired after a 41-year career, capped by service as the eighth Superintendent/President of Rio Hondo College in Whittier, CA. He also served in teaching and administrative positions in Texas, Chicago, and San Diego. He has served as a member of the AACC Board of Directors, was twice elected as president of the National Community College Hispanic Council (NCCHC), and is a champion of preparing Hispanic leaders for public service.

A Texas native, Dr. Martinez has dedicated himself to education, and been a strong role model for Latinos in academia. In a family of seven children, he was the eldest male child. When he was 14, he and his family joined the migrant farm worker stream, but because his parents were determined that he receive an education they did not go north to the fields until school was out in June and were back for the start of school in September. His parents’ commitment to education paid off, and all of their children completed high school.

Dr. Martinez earned both master’s and bachelor’s degrees in Business and Economics from Sul Ross State University in Alpine, Texas, and went on to receive a PhD degree in Higher Education Administration from the University of Colorado at Boulder.

Nationally, Martinez has been an effective force in building the NCCHC Leadership Fellows Program to prepare mid management personnel as future community college leaders at the executive level. He has also served as a board member of the Hispanic Association of Colleges and Universities; and as president of the National Council for Occupational Education; and he served as co-chair of the United States Department of Agriculture HACU Leadership Group.